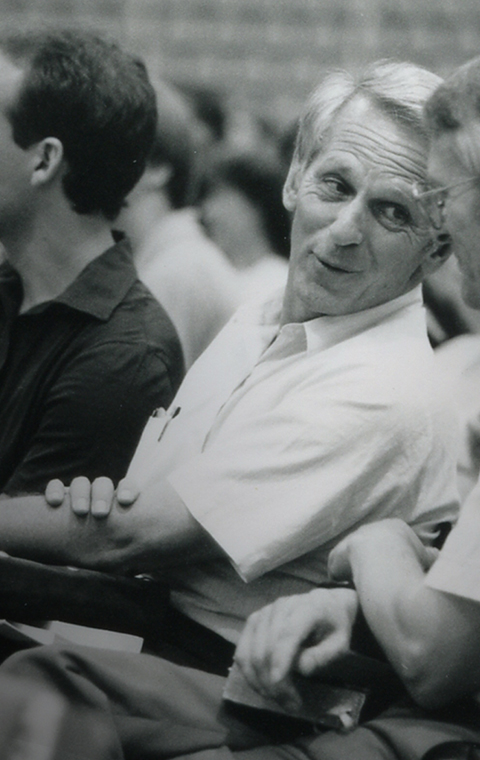 Brother Andrew: In His Own Words

“Awake, strengthen what remains, which is at the point of death.”

In his own words, Brother Andrew remembers how Open Doors started and why it began with a question.

That first step came from a curiously placed magazine in the cellar of the missionary training college in Scotland, where Brother Andrew was finishing two years of study. The glossy, four-colour publication was promoting a worldwide socialist youth festival in Warsaw.

“I read of a youth organisation of 96 million members; [I had] never heard of it. We were struggling with the church getting small groups together for catechism, service or entertainment. 96 million—it blew my mind. They have a big festival every 2 or 3 years somewhere in the world. I looked at names [of the places]—they sounded very unfamiliar to me, like closed places to me. And there was one coming up soon.

“So I wrote to them and said: “I read about what you are doing. I would like to attend one of these manifestations, but I’m a Christian. Can I come? If I do, I will behave as a Christian.” Period. I thought, I’ll never hear from that anyway. But there was a [return] letter: “You’re welcome. You can come as a Christian—do what you want.””

But Brother Andrew would not go empty-handed.

“I must go there with Scriptures”

“And then the idea was born: I must go there with Scriptures. So I ordered from the Scripture Gift Mission gospels, tracts and New Testaments in a number of Communist country languages, sent it, and I organised my trip. I did not tell anybody.”

While watching the final parade of Communist Youth at the festival, Brother Andrew gained the perspective he needed from his Bible. Brother Andrew with a few of the thousands of Bibles he collected in many languages. It was his practice to read through the entire Bible at least once and often twice each year. He alternated reading the Scriptures in Dutch, German and English.

“I watched that huge parade—so militant, so assertive, so aggressive, so seemingly strong—and God said [to me], “Every knee shall bow, every tongue confess, that Jesus Christ is Lord.” They were chanting and singing, and I thought, Your knees too, guys.”

At that point, Brother Andrew read the verse Revelation 3:2, which became the inspiration for Open Doors’ ministry.

“Awake, strengthen what remains, which is at the point of death.”

“Then I understood I had to go to the Christians. I had no idea how to get there; well, [maybe] in that one city, OK. [But] after that, I had no money, no contacts, no language. But something was aborning in my heart, and I said:

When he returned from that first trip to Eastern Europe, he began to ask God for an answer. And, slowly, it started to form: He began a new ministry he decided to call Open Doors. The name of our mission means literally every door is open for the Great Commission.

Brother Andrew
The Love Africa conference in 1978 was another important moment
in Open Doors history and helped launch the ministry to the
Persecuted Church on that continent. Here African church leaders
lay hands on Brother Andrew and pray for him.

“Every Door Is Open”

“The wonderful thing about the name Open Doors is that, in many meetings, I would explain by saying, “The name of our mission means literally every door is open for the Great Commission.” Jesus said, “Go” and that means Jesus opened up all the doors and no one can close [them] and no one has closed [them]. If you say it’s not possible, that means your eyes are closed, or your heart is closed. The doors are open.

In its 65-plus years, Open Doors has been driven to support and give a voice to the persecuted church around the world. From that initial trip to the Eastern Bloc, Brother Andrew spread his gospel-centered ministry to the places where the Church was under attack—China, the USSR, sub-Saharan Africa, the Middle East and more. And now? With activity in more than 70 countries, Open Doors continues the vision God gave Brother Andrew: to “strengthen what remains.” Brother Andrew in his office.

“People ask, “Andrew, what do you want written on your tombstone?”

“I have options. One of [my ideas]— it sounds very biased!—“He is not here, he has risen!” Another option is, “He did what he couldn’t” or, like Oswald Chambers’ gravestone, “Oswald Chambers, a disciple of Jesus Christ.”

That gives glory to God: “a disciple of Jesus Christ.” Is any further explanation needed?

“Is there a greater honor than to be called a disciple of Jesus Christ?” THE LEGACY OF BROTHER ANDREW

Brother Andrew’s legacy and impact stretches far across the world, from a lifetime of faithful ministry.

Today, Open Doors supports persecuted Christians in more than 70 countries who live under government, militant, and social threats. Often, we work as secretly as Brother Andrew once did.

You can learn more about the ministry of Open Doors here.